Valentines Day in a club- we were surrounded by really creepy people who wanted to drown their sorrows for being alone. Tbf, we were there too, so that doesn't make us any better. But we're not creepy haha!
I'm not gonna lie- there was a worrying amount of couples there, I would not have been impressed if I had a boyfriend and he suggested we went to a free club for the night where there are lots of creepy people!
I went with just my best friend/flatmate as our Valentine's date cause we have eachother, and that was fun. We didn't take our sprinkles and Parker Pen though (if you have no clue what I'm on about, read my previous post haha).
There were some creepy guys who wanted to dance with us, we managed to convince them we were lesbians to make them go away. I don't think they actually believed us, after we refused to kiss cause we were 'too shy to do it in public' haha. But they left us alone after that at least haha.
There was this really drunk girl and she literally ran into me and nearly knocked me over- was so rude. So this guy came up to me and was like "are you okay?! she hit you pretty hard" after making sure I was fine he went on his way. Then about an hour later we bumped into eachother again and he said "i just wanna make sure you don't have post traumatic stress after that" and I didn't see him again.
Then last night, when we were out (more on that later -awful awful night!) I bumped into him again, and he said he was talking about me to someone earlier in the day. What.
He said they'd asked whether he'd pulled the previous night, and he said (according to him) "No, but I did meet this girl who was really really pale and had bright red lipstick, it was amazing".
It's not just me- that is a really weird thing to say right!?
He wanted to take me out on a 'non-valentines day date', I'm not holding my breath on that one haha.

Anyway, this is what I wore on Tuesday: 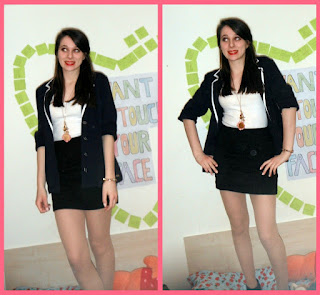 I've no idea where I was looking!

So we went out for the Traffic Light Party last night- it was horrific. You got labelled with a sticker, either "No thanks" for taken, "Maybe..." if you were seeing someone/willing to cheat/I've no idea, or "Try me" for single. It's safe to sat my 'Try Me' sticker lasted all of 2 minutes on me.
How disgusting, why would I want to be labelled like that.
So much drama over boys, I don't know why they act so stupid when they're drunk.
My friend is having major problems with a guy and we spent all night trying to work out what to do, which wasn't great. I got cornered by one of my friends who then proceeded to lick me (ewww) on my face over and over again.
I had to tell someone that I wasn't interested in him after he got the wrong end of the stick and he got very upset and was very drunk.
Then I woke up to a barrage of texts from all of his friends telling me what I horrible person I was and things. Lovely.

The past few days have been manic. I've officially become the CU's treasurer so I'm learning the ropes of that as well as being on the Missions Team (for the CU) and our missions weeks is next week.
I'm orgainising and hosting an Open Mic Night tomorrow night so that's been really stressful figuring out everything. And I've also managed to volunteer to orgainise a drama to perform in a weeks time..that's an awful lot of work for a week haha. It's all very stressful!

ButterflyBoo
An Essex girl living it up with the sheep in Wales. Expect the adventures of university- there have been many.