My blogging skills have been awful recently. I'm going to try hard to catch up on blogs, but I've got so much on lately, I just haven't had time to think! I've had this afternoon off so have done some work, and cleaning and can finally sit down and blog!

The past week I've told you about palefaceandredlipstick guy. If you don't have a clue what I'm on about, read about it here. The date alone deserves it's own blog post- it was that bad haha.
You'd think the warning bells would have gone off with the whole 'I told my friend about the girl with the pale face and red lipstick' thing, but I let that slip, turns out - it was just a little glimpse of the guy he was.

He was the most awkward arranger ever. It took him 2 days to reply or send a text, making plans very difficult. He text me on Monday asking whether I wanted Chinese or Italian, fair enough. So I replied, it took him until 3pm on Tuesday to say is half 8 okay and should we walk there together, so I replied saying sure, where I lived. And then nothing.
I waited until 8pm, and was very much doubting I was gonna end up going out, until he rang me saying he'd meet me in ten minutes round the corner.

So I left and was walking to the meeting place, and I saw this guy.
And at that moment I prayed that it wasn't him (I couldn't even remember what he looked like!)
Unfortunately, it was. And he was wearing this: 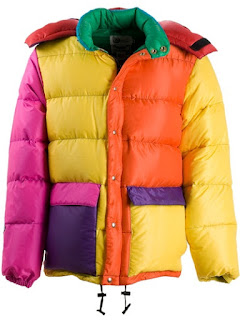 I wish I was joking.

We got to the restaurant, which was actually really nice, I was impressed. It was authentic Italian (apart from the welsh waitress aha) too. We sat down and they asked what I wanted to drink, see I'm trying to cut out unhealthy things for Lent, so I said water. Then he ordered water... He then called me a 'crazy cat'. Yes, he called me a crazy cat. -Insert nervous laughter here-
We spent most of dinner talking about tea, yeaaaah tea.
We found a mutual appreciation of biscuits and tea, but he took this to mean that I was obsessed with it, and he proceeded to name every single type of tea he knew to see a) whether I'd tried it and b) whether I think you'd need milk for it. Safe to say I was stuck for things to say.

However, he was hot. And there was a point where I forgot about the coat, what he was saying and just looked at him and thought; 'If I was really really shallow and didn't listen to him ever, make him burn the coat...this could work'. Of course he started talking about rectal thermometers again so that thought went straight out the window.

Once we'd finished dinner, we walked outside and it was pouring with rain - not just rain. It was like a hurricane. For some reason every so often we get 'Hurricaine Bangor' where you can't even walk in a straight line because the wind and rain is so strong. So yeah, that's what we were walking back in.
I really wanted to go home, to my pj's, and to my best friend so I was focusing on walking up the hill that I didn't really turn to him to talk. I just walked and talked. But at one point I did turn- and what sight greeted me? Well, he had his hood up (obviously) but the little button bit done up under his chin too, which made only his eyebrows to his mouth visible. But because it was raining- it was dripping.
I have no words to describe that sight.

He walked me back to my flat which was very nice of him, but as it was raining I had a good reason to go in quickly and avoid having to kiss him. It was awkward but painless. I'm ashamed I probably ran inside.

That was my date: it was not good. He was crazy.

Here's what I wore: 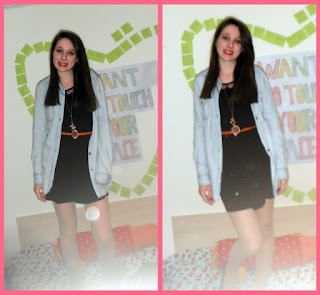 The pictures are awful- I'm not really sure what happened haha.
Dress: New Look childrens range
Denim shirt: River Island
Belt: Came with a skirt
Necklace: Internacionale
Of course I had red nails and red lips to make sure he recognised me haha!

I'm giving up Biscuits for Lent- it's day one and I'm already struggling!!

That was my date, anyone else got any date disaster stories?

ButterflyBoo
An Essex girl living it up with the sheep in Wales. Expect the adventures of university- there have been many.